Reflections on the evolving field of diet and optimum health 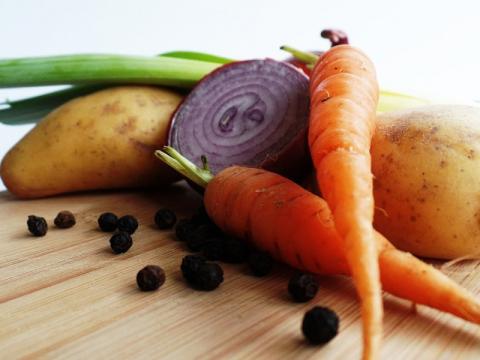 Nutrition’s legacy as a “soft science”

Nutrition has always been considered a “soft science”—a field rife with studies showing associations but no firm causations. Conclusive trials in humans are very difficult to do, and long-term studies assessing disease prevention are often cost prohibitive. In the past, the status quo was to do studies with laboratory animals to test whether a certain food or nutrient had an effect on cancer incidence or the hardening of arteries that can lead to heart disease or another such end point, but this approach lacked a critical element: the “why” was missing. “Something went in, something possibly resulted from it, but what happened in-between was largely a black box,” said Linus Pauling Institute Director and Distinguished Professor of Biochemistry and Biophysics Balz Frei, PhD. “What was lacking was mechanisms.”

So that’s where the Linus Pauling Institute focused its energy. Taking the reins in 1997 from founder and two-time Nobel Prize winner Linus Pauling, Dr. Frei built an institute at Oregon State University focused on breaking open that black box, understanding molecular nutrition, and thus elucidating the role of diet and supplements in maintaining optimum health well into old age. “What I wanted to achieve with the institute was to put science behind nutrition,” he said. Now, as Frei prepares to retire from his post this June, he can confidently say that he’s made excellent progress towards this goal, and in doing so, helped lead the field of nutrition into more science and mechanism based research capable of having real impact on human health and disease.

A focus on mechanisms

Much of the work of the institute has focused on an underlying cause of chronic disease: inflammation. Inflammation and its accompanying surge of reactive oxygen molecules known as “free radicals,” are tied to several major killers, including heart disease, stroke, diabetes, and cancer.  In addition to discovering more about the mechanisms of inflammation, scientists at the institute have honed in on the molecules that prevent free radical damage, known as antioxidants. They’ve made important discoveries regarding the antioxidant functions and health benefits of vitamins C and E, for instance. Vitamin E in particular is an area where LPI scientists have made great strides in understanding why this nutrient is required by the body and the role it plays in protecting critical fats, especially during brain development.

Further, the institute has helped change the paradigm around vitamins and other nutrients: instead of viewing them simply as a way to correct or prevent a deficiency condition like scurvy, they are increasingly being recognized as a way to counter toxic insults and contribute to healthier aging. One molecule in particular has shown promise in its ability to “bring cells back to a youthful state,” said Frei, referring to the institute’s research on lipoic acid. This dietary compound triggers a reaction that results in cells being more capable of fending off free radicals and other insults that cause inflammation and ultimately disease.

Phytochemicals, or chemicals found in plants that may affect health, is another area where the institute has broken new ground. From catechins in tea to quercetin in onions to sulforaphane in broccoli and xanthohumol in hops, scientists here have discovered the mechanisms and roles of these and other plant-based chemicals in preventing conditions such as cancer, metabolic syndrome, and cardiovascular disease. They’ve figured out how certain dietary compounds can impact gene expression and affect cancer development or prevention. A notable cancer success story has been with chlorophyll, a phytochemical that gives plants their green color. LPI scientists discovered that chlorophyll can bind to a toxic mold compound called aflatoxin that causes liver cancer and thus render it inactive—creating an inert “molecular sandwich that can’t be absorbed by the body,” said Frei. This basic mechanistic research, and the institute’s accompanying human trial in China where this mold is often found growing on food, was a major success story, and work continues today to apply these findings to public health.

With the advent of multi-drug resistant bacteria (including one recently confirmed strain that resists medicine’s last ditch antibiotic), the institute’s research into how vitamin D boosts the body’s immune system could play an ever greater role in the future. Vitamin D plays a crucial role in many functions of the body, not just bone health, and it’s now a public health challenge to raise the levels of it in the population worldwide so that everyone has the best shot at fighting infections, said Frei. “We’re not only doing basic research,” he said, referring to the institute’s research on vitamin D as well as many other vitamins, minerals, and phytochemicals, “but coming out of the ivory tower and really helping people make the right decisions regarding the use of diet and dietary supplements for their health.”

A bridge to the medical community

If there’s one thing Dr. Frei could hope for in terms of the future of the institute, it would be for it to reach out more fully and collaboratively to the medical community. “Communication between the nutrition science and medical communities is not happening at the scale it needs to right now,” he said. What’s needed is a bridge, and Frei thinks the institute—with its well established Micronutrient Information Center and other public outreach services—is well suited to be that bridge. “If the Linus Pauling Institute could bring about a change in how medical doctors are educated, I think that would be a huge contribution to public health,” said Frei.

While many hurdles remain in changing perceptions on diet and supplements among the medical community as well as the general public, the urgency to do so becomes ever more clear as rates of chronic, preventable diseases continue to escalate. For Dr. Frei, it comes back to the science. “There’s so much bad information out there, so many false promises when it comes to dietary supplements,” he said, and the institute is trying to counter these claims with evidence-based health information about vitamins, minerals, and phytochemicals. While it has been, and to some extent still continues to be, an uphill battle for nutrition science to establish itself as a legitimate field—a “hard” science—there’s a realization now of how critical the field is to human health, said Frei, and that sets the stage for a strong research agenda for the institute’s future.

Retiring director Balz Frei says that LPI has made excellent progress, leading the field of nutrition into more science and mechanism based research.
Donate to the Institute
Get Updates from the Institute