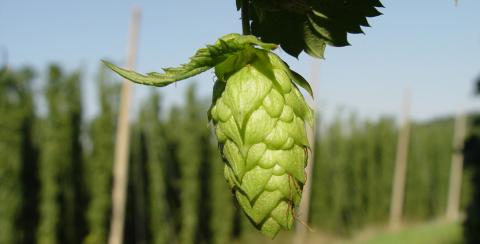 "Hops Umbel" by the mad Penguin is licensed under CC BY 2.0

CORVALLIS, Ore. – A growing body of evidence suggests that two natural compounds, vitamin D and xanthohumol, have the ability to address imbalances in gut microbiota that may set the stage for obesity and metabolic syndrome - problems that affect about one out of every three adults in the United States.

To explore and identify the specific mechanisms by which these compounds have beneficial effects, researchers in the Linus Pauling Institute at Oregon State University have received a new five-year, $2.64 million grant from the National Institutes of Health.

The possible payoff of this research, they say, may be an entirely new way to reduce or prevent some of the major diseases that are killing millions of people every year, such as heart disease and type-2 diabetes.

The new approach would attempt, using high dose supplementation, to prevent disease from developing, instead of treating it after the fact.

“The benefits of xanthohumol and vitamin D have been clearly shown in laboratory studies to reduce weight gain and improve gut barrier defenses,” said Adrian Gombart, an associate professor of biochemistry and biophysics in the OSU College of Science, and a principal investigator with the Linus Pauling Institute. “These compounds appear to activate nuclear receptors and pathways that may affect microbe composition, and in the process reduce the damage from metabolic syndrome.”

One study published by OSU researchers two years ago in the Journal of Biological Chemistry found that rats given xanthohumol supplements, which are made from hops, had a 14 percent reduction in weight gain, a 25 percent reduction in plasma fasting glucose, and improved lipid metabolism, compared to a control group of rats that ate the same amount of food. They had a higher rate of fatty acid oxidation and energy metabolism. In simple terms, they burned more fat.

In other studies, higher levels of vitamin D status in humans have been associated with reduced risk of obesity, metabolic syndrome, cancer, infectious diseases, autoimmune diseases, and other health problems.

The OSU researchers believe some of the benefits of vitamin D and/or xanthohumol may be a strong increase in the expression of the cathelicidin antimicrobial peptide, or CAMP gene. The hypothesis to be tested in this research, using animal models, is that higher CAMP levels improve gut epithelial barrier function, reduce inflammation, modify gut microbiota and in the process reduce problems with obesity and metabolic syndrome.

“Some of the benefits we’re seeing are fairly clear and dramatic, and we need to better understand the mechanisms that cause them,” Stevens said.

The compounds may also affect liver function, shutting down metabolic pathways that produce fat and glucose, he said.

Vitamin D can be obtained through either the diet or produced by the skin, with adequate exposure to sunshine. Millions of people who live in temperate zones around the world, however, have been found to have inadequate levels of this vitamin, but this can be corrected by taking a supplement.

Xanthohumol, a flavonoid, is also a natural compound and is found in the hops used to make beer. Researchers point out, however, that the levels of xanthohumol being used in this research greatly exceed any amount that could be obtained by drinking beer.

Direct health care costs arising from obesity and related disorders accounts for almost 10 percent of U.S. health care expenditures each year, the researchers said. The health care costs of diabetes alone were estimated in the U.S. at $176 billion in 2012, and it’s one of the leading causes of death in the nation.

A growing body of evidence suggests that two natural compounds, vitamin D and xanthohumol (isolated from the hops plant), have the ability to address imbalances in gut microbiota that may set the stage for obesity and metabolic syndrome.
Donations to the Institute
Subscribe to our Research Newsletter

New research has shown that people with metabolic syndrome need significantly more vitamin E – which could be a serious public health concern, in light of the millions of people who have this condition that’s often related to obesity.