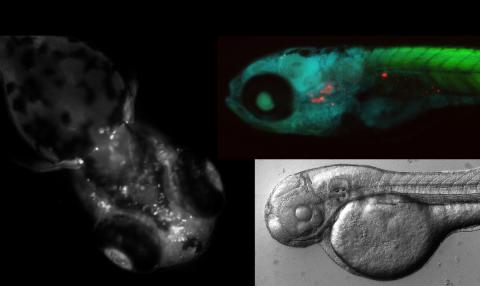 Most human brain development occurs during pregnancy, and some of the most important neurologic development happens during the first trimester. Researchers at the Linus Pauling Institute have now discovered that a dietary deficiency of vitamin E can cause significant impairments in developing embryos that could lead to death. This takes on special significance because more than 90 percent of the adults in the United States who do not take supplements have diets deficient in vitamin E.

“Our research showed that adequate levels of vitamin E are important in preventing depletion of DHA in the embryo," said Melissa McDougall, an OSU graduate research assistant in the LPI and the College of Public Health and Human Sciences.

The recommended daily allowance of vitamin E for human adults is 15 milligrams a day, and the typical American diet rarely provides that. Vitamin E is most common in nuts, seeds, some leafy greens like spinach, and a few varieties of vegetable oils like sunflower and canola. Low-fat diets also present a special challenge in getting enough vitamin E. DHA is one of the most important of the omega-3 fatty acids in brain and cellular development, found naturally in fatty fish and is a component of fish oil supplements.

“DHA in a developing embryo is very important for cell signaling and membrane development. Without enough DHA, there is evidence for disruption of the structural integrity of cell membranes as a whole."

"It appears that vitamin E protects these critical lipids, such as DHA, from excessive depletion that can cause physical and behavioral damage.”

This current work was done with zebrafish, a model that has neurologic development very similar to humans, and also with more similar dietary needs than some other animal models. In these fish, vitamin E-deficient embryos did not respond correctly to visual cues, had severe physical abnormalities as early as two days after fertilization, and many died before the end of five days. Some of the embryos that survived displayed impaired behavior, indicative of brain damage.

The research suggests that vitamin E cannot serve its role in protecting DHA if there is not enough DHA around to begin with.

With support, the researchers can expand their studies into work more relevant to pregnant mothers. For instance, looking at the effects of pre-natal vitamin supplements. Some may not include vitamin E, but some of the better ones are now including not only vitamin E but also DHA. The impact of these two nutrients in supplements on brain development and miscarriage risk is not yet known.

The corresponding author on this publication was Maret Traber, the Helen P. Rumbel Professor for Micronutrient Research in the Linus Pauling Institute.

Without sufficient amounts of vitamin E, embryos fail to thrive.
Donate to the LPI
Want Our Free Research Newsletter?

New research has shown that people with metabolic syndrome need significantly more vitamin E – which could be a serious public health concern, in light of the millions of people who have this condition that’s often related to obesity.