Childhood obesity has become epidemic in the United States. Results from the 2007-2008 National Health and Nutrition Examination Survey estimate that 16.9% of children and adolescents aged 2-19 years are obese compared to only 5% in 1971. According to the 2007 National Survey of Children's Health, obesity rates for 10- to 17-year-old children range from 9.6% in Oregon to 22% in Mississippi.

Childhood obesity is associated with many health risks, such as pediatric hypertension, type 2 diabetes, orthopedic complications, and impaired mobility, and can result in psycho-social consequences like low self-esteem, social isolation, and discrimination. In addition, long-term studies have shown that obese children are likely to become obese adults. Most experts agree that physical inactivity and a poor diet are the root causes of obesity and that there is a widespread need to promote regular physical exercise and better eating habits among children. Clinicians and public health officials recommend that children engage daily in 60 minutes of moderate to vigorous physical activity, such as brisk walking, running, cycling, or playing outdoors. However, opportunities for children to be physically active during school days have decreased in most schools across the United States. Additionally, time spent on sedentary activities like watching TV or playing computer and other video games is increasing.

Several surveys indicate that many children do not obtain an adequate intake of many vitamins and minerals in their diet that are essential for good health and disease prevention. The Multivitamins & Public Health Workshop in 2003 suggested that "multivitamin/mineral supplementation to increase micronutrient intake to recommended levels is a prudent, inexpensive, and convenient way to improve the public’s health status."

Vitamin D deficiency in American children is becoming a major concern. While parents and pediatricians may have assumed that children are getting enough vitamin D from sunshine, vitamin D-rich foods, and vitamin D-fortified milk, a study published in 2009 found that 70% of children have inadequate vitamin D levels and nearly 10% are deficient. Most people living above 40 degrees latitude do not obtain enough vitamin D from about mid-November to early March. People with dark-colored skin have a significantly lower ability to synthesize vitamin D from sunlight, as do the elderly, and obesity increases the risk of vitamin D deficiency because these individuals cannot easily access the vitamin D stored in their body fat.

New evidence shows that vitamin D deficiency may not only be associated with rickets and osteoporosis but also with muscle pain and weakness; cancers of the breast, prostate, and colon; high blood pressure; heart disease; multiple sclerosis; rheumatoid arthritis; osteoarthritis; type 1 and 2 diabetes; irritable bowel syndrome; and Crohn's disease. Research by LPI's Dr. Adrian Gombart has shown that vitamin D also plays a critical role in immune function by enhancing the production of a protein in the body that can fight viruses and bacteria (see the Spring/Summer 2010 LPI Research Newsletter). Hence, vitamin D plays an important role in preventing upper respiratory tract infections, tuberculosis, and other viral and bacterial infections that occur during the flu season. Based on these findings, the Linus Pauling Institute recommends that children supplement their daily diet with 1000 IU of vitamin D to achieve good health.

During the 2009-2010 school year, we implemented a program to increase fruit and vegetable consumption and physical activity among elementary school children in the 3rd, 4th, and 5th grades at a school in Corvallis, Oregon. Three times a week, students participating in the program walked or ran on an outdoor track during the 20-minute morning recess; ate a fresh fruit for morning snack instead of the usual crackers, chips, or cookies; and ate fruits and/or vegetables with lunch. Students were also offered a daily children's multivitamin/mineral with 1000 IU of vitamin D. Lastly, we provided three modules of nutrition education classes during the school year.

We set up a point system to assess study compliance. Each student could collect a maximum of 9 points per week (3 points each for walking/running, fruit snack, and fruit and vegetables for lunch); a minimum of 6 points per week was required (66% participation) to be considered compliant and remain in the study. Incentives, such as T-shirts and Frisbees, were given to enhance compliance. We measured the students' height and weight and calculated their body mass index (BMI) three times during the school year and asked them to fill out a validated Food Questionnaire, Physical Activity Survey, and Pediatric Quality of Life Questionnaire twice during the school year.

One hundred and thirteen students, or 52% of the 219 students in grades 3-5 at the school, voluntarily enrolled in the study. Interestingly, 71% of all girls in grades 3-5 enrolled, but only 37% of boys enrolled. Of the 113 enrollees, 85 completed the study, corresponding to 75% compliance. Among these 85 students, the level of participation differed significantly between grades—3rd graders had a higher participation level (84%) than the 4th and 5th graders (70% and 69%, respectively). The level of participation for all grades decreased from 82% at the beginning to 70% at the end of the study. Further analysis showed that the decline in participation was due to a decrease in walking/running during recess, whereas fruit and vegetable consumption remained unchanged. This declining participation in physical activity was observed for all grades, but the 3rd grade students maintained a significantly higher level of participation than the 4th and 5th graders throughout the study.

The calculation of body mass index (BMI) for children, unlike adults, takes into account the child's gender and age and is expressed as a percentile. A BMI below the 85th percentile indicates a healthy weight; overweight is defined as a BMI between the 85th and 95th percentile; and obese is a BMI higher than the 95th percentile. Among our study’s students, the number of overweight and obese students decreased with a corresponding increase in students with a healthy weight (see figure at top right). This reduced prevalence of overweight and obesity was mainly attributable to a decrease in the mean BMI of the children in the three 3rd grade classrooms and in one 5th grade classroom. The mean BMI of the 3rd graders decreased from the 62nd to the 51st percentile and for the 5th graders from the 71st to the 64th percentile. These four classrooms also had the highest number of study participants, indicating that the higher the participation per classroom, the greater the decrease in BMI.

Interestingly, we observed a similar trend in BMI change among the non-study children in all 3rd grade classrooms. These results probably reflect teacher support for the study. It is likely that support by these teachers had an impact on the health behavior of their students regardless of the students' participation in the study.

The Food Questionnaires revealed that the fruit/fruit juice and vegetable intake did not differ between girls and boys (see figure below). The children consumed about half a cup more fruit than recommended by the U.S. Department of Agriculture. However, reported vegetable consumption was significantly below the recommended intake of 2.5 cups. The increased fruit intake is likely due to the fresh fruit offered for morning snack. The reported fruit and vegetable intake did not change significantly from the beginning to the end of the study. The Food Questionnaires also revealed that most children did not get the recommended amounts of vitamins A and E, calcium, and magnesium from their diet, and many also did not get enough vitamin K, iron, and zinc. We were unable to assess vitamin D status because we could not obtain blood samples from the children. 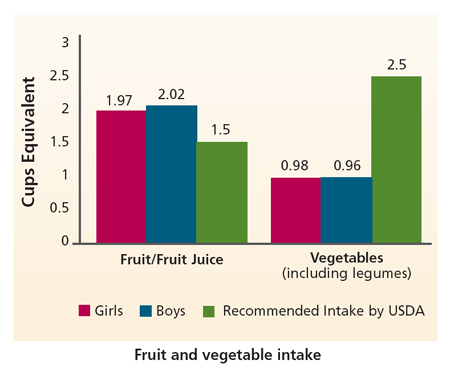 The Physical Activity Survey showed that the mean daily physical activity time in all three grades was 60 minutes or more (see figure below) and did not change significantly throughout the study, although the participation in walking/ running declined, as mentioned above. These data indicate that the children met the recommended guidelines of 60 minutes of moderate to vigorous physical activity daily but may also suggest that the students didn't report their level of activity accurately. 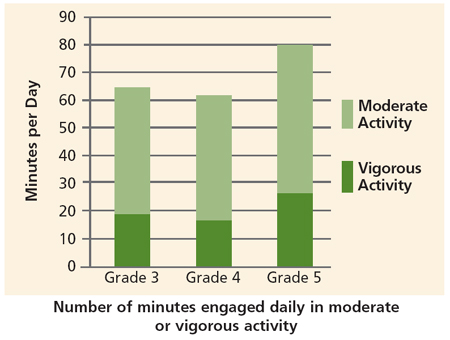 Our study was successful in recruiting more than 50% of eligible students, especially females, and kept a remarkable 75% of enrolled students motivated throughout the entire school year to improve their eating and physical activity habits.

The high level of participation, the decrease in BMI, and the low drop-out rates in the three 3rd grade classrooms and one 5th grade classroom suggest that teacher support is a critical influence on the students' health behaviors, a concept that needs to be further analyzed and confirmed. It is also likely that parent support and peer pressure influence children's health behaviors.

The study also indicated that children are more likely to eat fruits and vegetables when given the opportunity and encouragement. In contrast, study participation in physical activity was low among 4th and 5th graders and declined over time in all grades, suggesting that it needs to be more encouraged and incentivized, especially given the key role of physical activity in maintaining a healthy weight.

The LPI Fitness & Nutrition Study was supported by grants from the Spirit Mountain Community Fund and the Juan Young Trust, both in Oregon, and a generous gift from an anonymous donor. The children's multivitamin/mineral supplement was a gift from USANA Health Sciences Inc., Salt Lake City, UT.