Good childhood nutrition and a healthful diet have long been recognized as critical for optimum health and well being throughout life. Inadequate micronutrient intake has been reported in children of communities with low socioeconomic status. Studies indicate that excessive consumption of calories from carbohydrates and fats (macronutrients) combined with inadequate consumption of vitamins and minerals (micronutrients) are a major problem in U.S. children. Obesity and type II diabetes are more prevalent in children of families with low socio-economic status and limited access to nutrient-dense foods. However, the incidence of obesity and type II diabetes also have steadily increased in children of communities with higher socio-economic and educational status (Search for Diabetes in Youth Study Group., 2009; Ogden et al., 2010). 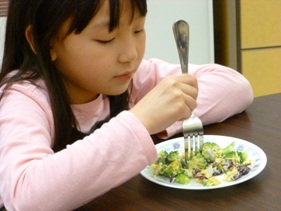 The objective of the present study was to evaluate the intake of macronutrients and micronutrients of children in four elementary schools in Corvallis, OR, where most parents have the necessary resources and access to healthful, nutrient-dense foods, in particular fruits and vegetables. 175 children, ages five to eleven years, participated in our study. They were asked to record their dietary intake during the previous week on a two-page food questionnaire that was specifically developed for elementary school-aged children. Nutrient intake estimates from the questionnaires were compared to current dietary intake recommendations to evaluate the children’s nutrient status. We also obtained a blood sample from 71 children to measure vitamin D body status. Since most of the vitamin D present in our body is synthesized in the skin upon sun exposure and only some is derived from the diet, blood vitamin D levels are the best indicator of a person’s vitamin D status.

We found that 60 percent of the younger children (5 to 8 years old) and 78 percent of the older children (9 to 11 years old) did not meet the recommended intake for fiber. Low fiber intake, mainly from legumes and whole grains, has been associated with a greater risk of obesity, metabolic syndrome, and chronic diseases. Not surprisingly, most of the children had a diet high in saturated fat (81 percent) and sodium (89 percent). None of them met the income recommendations for potassium, which – together with the high sodium intake – does not bode well for the children’s risk of developing high blood pressure later in life. In addition, none of the children met the intake recommendations for vitamin E, and 22 percent did not get enough vitamin K, which is required for normal blood clotting.

It is well known that U.S. children do not consume enough calcium-rich foods, with sugary sodas increasingly replacing milk consumption. Consistently, we found that the older children in our study consumed less dairy products and fat and more sugar-enriched foods and beverages than the younger children. Adequate intake of calcium throughout childhood and adolescence is critical for proper mineralization of growing bones, attainment of peak bone mass, and reduction of the risk for osteoporosis in adulthood. We found that 16 percent of the younger children and 45 percent of the older ones did not meet the dietary intake recommendations for calcium. 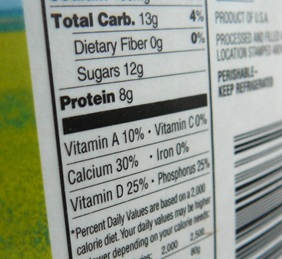 Vitamin D is essential for maintaining normal calcium metabolism and, thus, good bone health. Severe vitamin D deficiency in children results in the failure of bone to mineralize, leading to a condition known as rickets. Cases of nutritional rickets are still reported in the U.S. While parents and pediatricians may have assumed that children are getting enough vitamin D from sunshine exposure and vitamin D-fortified milk and orange juice, a study published in 2009 found that 7 out of 10 children have inadequate vitamin D levels and nearly 1 in 10 children (7.6 million) are deficient in vitamin D (Kumar, Juhi et al Prevalence and Associations of 25-Hydroxyvitamin D Deficiency in US Children. 2012). Most people living above 40 degrees latitude, which includes Oregon, don’t make enough vitamin D in their skin and suffer from vitamin D-deficiency during the winter months. Our study found similar results: 61 percent of the children had insufficient vitamin D levels and 8 percent were considered deficient.

Taken together, the results of our study raise serious concerns about the nutrient intake of children even in affluent communities. The low dietary intake of calcium together with low vitamin D status may have detrimental consequences for bone health, both in the short-term and long-term. There is a critical need for tools that help parents and health professionals assess children’s nutrient status and provide guidance to improve their nutrient intakes. The Linus Pauling Institute recommends that children of all ages eat a healthful diet, are physically highly active, and take a daily children’s multivitamin/mineral containing at least 600 IU of vitamin D to cover possible micronutrient inadequacies.

Donations to the Institute
Subscribe to our Research Newsletter