Liver recovery difficult even with improved diet, but faster if sugar intake is low 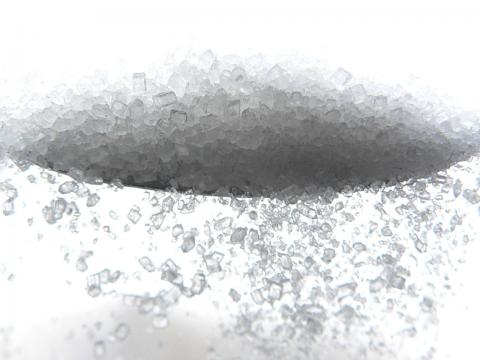 "A little sugar in my bowl" by Umberto Salvagnin is licensed under CC BY 2.0

The study this story is based on is available online: http://bit.ly/1PLJcI1

CORVALLIS, Ore. – Liver damage caused by the typical “Western diet” – one high in fat, sugar and cholesterol that’s common in developed countries such as the United States – may be difficult to reverse even if diet is generally improved, a new study shows.

The research, published today in PLOS ONE by scientists from Oregon State University, found that a diet with reduced fat and cholesterol helped, but did not fully resolve liver damage that had already been done – damage that in turn can lead to more serious health problems, such as cirrhosis or even cancer.

This study, done with laboratory animals, showed that diets low in fat and cholesterol could in fact aid with weight loss, improved metabolism and health. But even then, if the diet was still high in sugar there was much less liver recovery, the scientists concluded.

The findings are significant, scientists say, because liver problems such as nonalcoholic fatty liver disease are surging in the U.S., affecting 10-35 percent of adults and an increasing number of children. The incidence of this problem can reach more than 60 percent in obese and type-2 diabetic populations.

“Many people eating a common American diet are developing extensive hepatic fibrosis, or scarring of their liver, which can reduce its capacity to function, and sometimes lead to cancer,” said Donald Jump, a professor in the OSU College of Public Health and Human Sciences, principal investigator with the Linus Pauling Institute, and corresponding author on this research.

“There’s a lot of interest in finding ways to help the liver recover from this damage, but this research suggests that diets lower in fat and cholesterol, even if they help you lose weight, are not enough,” Jump said. “For more significant liver recovery, the intake of sugar has to come down, probably along with other improvements in diet and exercise.”

The issues are both serious and complex, the researchers said.

“Everyone recognizes this is a serious problem,” said Kelli Lytle, an OSU doctoral candidate and lead author on this study. “We’re trying to find out if some of the types of dietary manipulation that people use, such as weight loss based on a low fat diet, will help address it. However, a common concern is that many ‘low-fat’ food products have higher levels of sugar to help make them taste better.”

Weight loss does appear to help address some of the problems associated with the Western diet, the research shows. But according to this study, a diet with continued high levels of sugar will significantly slow recovery of liver damage that has already been done.

Complications related to liver inflammation, scarring and damage are projected to be the leading cause of liver transplants by 2020, the researchers noted in their study. Such scarring was once thought to be irreversible, but more recent research has shown it can be at least partially reversed with optimal diet and when the stimulus for liver injury is removed.

In this report, scientists studied two groups of laboratory mice that had been fed a “Western diet” and then switched to different, healthier diets, low in fat and cholesterol.

Both of the improved diets caused health improvements and weight loss. But one group that was fed a diet still fairly high in sugar – an amount of sugar comparable to the Western diet - had significantly higher levels of inflammation, oxidative stress and liver fibrosis.

This research was supported by the National Institutes of Health and the U.S. Department of Agriculture.

Liver damage caused by the typical “Western diet” – one high in fat, sugar and cholesterol that’s common in developed countries such as the United States – may be difficult to reverse even if diet is generally improved, a new study shows.
Donate Now
Get Updates from the Institute