Dr. Pauling, for whom the Linus Pauling Institute has great respect, based his own recommendations for vitamin C largely on theoretical arguments. In developing his recommendations, he used cross-species comparisons, evolutionary arguments, the concept of biochemical individuality, and the amount of vitamin C likely consumed in a raw plant food diet. Using this approach, Dr. Pauling suggested in the early 1970s that the optimum daily intake may be about 2,000 milligrams of vitamin C and that everyone should get at least 200 to 250 mg/day. In a 1974 radio interview, he noted that "the first 250 mg is more important than any later 250 mg. The first 250 mg leads you up to the level where the blood is saturated. You can achieve a higher volume [concentration] in the blood by a larger intake, but you get much better improvement for the first 250 mg than for additional grams." Dr. Pauling significantly increased his recommendation in his 1986 book How To Live Longer and Feel Better. At the Linus Pauling Institute, we have based our vitamin C recommendations on the current body of scientific evidence, which is significantly greater than it was at Pauling's time but remains incomplete owing to the many diverse functions of vitamin C in the human body that have yet to be fully understood.

In this context, it is important to note that data from the National Institutes of Health (NIH) have indicated that vitamin C levels in plasma and circulating cells become fully saturated at intakes of about 400 mg/day in young, healthy nonsmokers. These observations are consistent with other data that intakes of about 400 mg/day are associated with reduced risk of heart disease. While these NIH studies are the best we currently have regarding the pharmacokinetics of vitamin C in the human body, they have numerous limitations, including the fact that they are based on a small number of young, healthy men and women. We currently do not know how much vitamin C is required to achieve saturation of cells and tissues in children, older adults, and diseased or stressed individuals. A meta-analysis of 36 studies on the relationship between vitamin C intake and plasma concentrations found that the elderly require a substantially higher daily intake of vitamin C to attain plasma concentrations that younger adults achieve at a lower intake. Additionally, work by Linus Pauling Institute investigators has shown that cellular uptake of vitamin C declines with age, supporting the notion that vitamin C requirements are increased in the elderly.

Therefore, the Linus Pauling Institute's intake recommendation of 400 mg/day of vitamin C for generally healthy adults takes into account the currently available epidemiological, biochemical, and clinical evidence, while acknowledging the extremely low toxicity of vitamin C and the incomplete information regarding optimum intake. It should also be noted that the Linus Pauling Institute's recommendation is strictly directed towards prevention of disease in healthy individuals, not treatment of disease. Thus, individuals suffering from certain diseases may require substantially larger amounts of vitamin C to achieve optimum body levels or derive therapeutic benefits, areas that were of great interest to Linus Pauling and need to be further explored.

For information about the roles of micronutrients in the immune system, see our Immunity In Brief topic page.

Donate to the MIC
Want Our Free Research Newsletter? 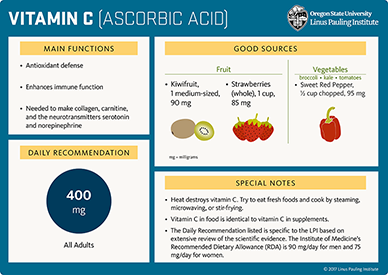 The Linus Pauling Institute Micronutrient Information Center provides scientific information on the health aspects of dietary factors and supplements, food, and beverages for the general public. The information is made available with the understanding that the author and publisher are not providing medical, psychological, or nutritional counseling services on this site. The information should not be used in place of a consultation with a competent health care or nutrition professional.

You may not copy, modify, distribute, display, transmit, perform, publish or sell any of the copyrightable material on this website. You may hyperlink to this website but must include the following statement: