Pantothenic acid, also known as vitamin B5, is essential to all forms of life (1). Pantothenic acid is found throughout all branches of life in the form of coenzyme A, a vital coenzyme in numerous chemical reactions (2). 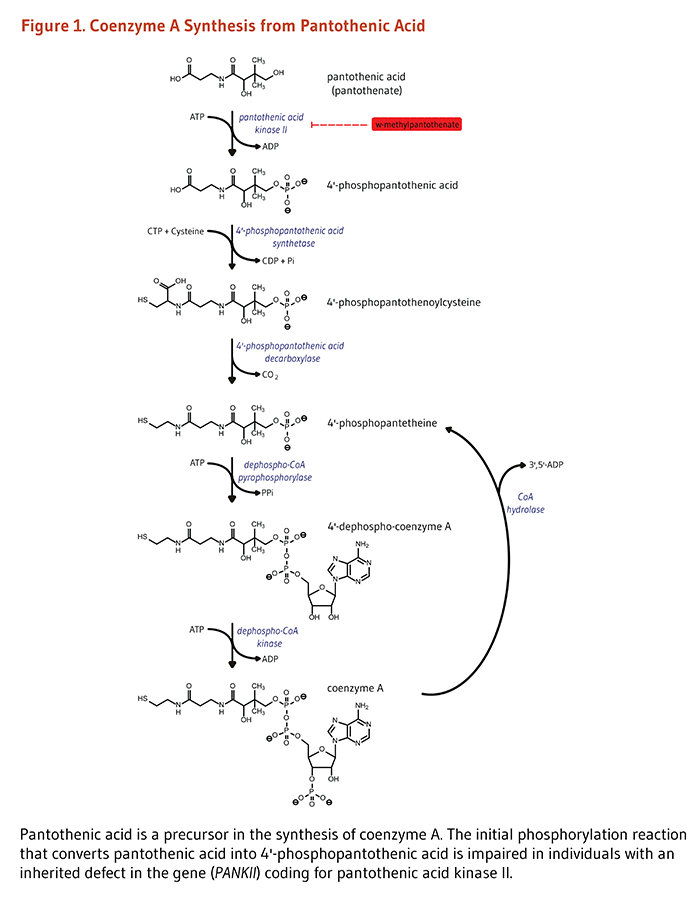 Coenzyme A reacts with acyl groups, giving rise to thioester derivatives, such as acetyl-CoA, succinyl-CoA, malonyl-CoA, and 3-hydroxy-3-methylglutaryl (HMG)-CoA. Coenzyme A and its acyl derivatives are required for reactions that generate energy from the degradation of dietary fat, carbohydrates, and proteins. In addition, coenzyme A in the form of acetyl-CoA and succinyl-CoA is involved in the citric acid cycle, in the synthesis of essential fats, cholesterol, steroid hormones, vitamins A and D, the neurotransmitter acetylcholine, and in the fatty acid β-oxidation pathway. Coenzyme A derivatives are also required for the synthesis of the hormone, melatonin, and for a component of hemoglobin called heme. Further, metabolism of a number of drugs and toxins by the liver requires coenzyme A (4).

Coenzyme A was named for its role in acetylation reactions. Most acetylated proteins in the body have been modified by the addition of an acetate group that was donated by the coenzyme A thioester derivative, acetyl-CoA. Protein acetylation alters the overall charge of proteins, modifying their three-dimensional structure and, potentially, their function. For example, acetylation is a mechanism that regulates the activity of peptide hormones, including those produced by the pituitary gland (5). Also, protein acetylation, like other posttranslational modifications, has been shown to regulate the subcellular localization, the function, and the half-life of many signaling molecules, transcription factors, and enzymes. Notably, the acetylation of histones plays a role in the regulation of gene expression by facilitating transcription (i.e., mRNA synthesis), while deacetylated histones are usually associated with chromatin compaction and gene silencing. The acetylation of histones was found to result in structural changes of the chromatin, which affect both DNA-protein and protein-protein interactions. Crosstalk between acetylation marks and other posttranscriptional modifications of the histones also facilitate the recruitment of transcriptional regulators to the promoter of genes that are subsequently transcribed (reviewed in 6).

Finally, a number of signaling molecules are modified by the attachment of long-chain fatty acids donated by coenzyme A. These modifications are known as protein acylation and have central roles in cell-signaling pathways (4).

Lipids are fat molecules essential for normal physiological function and, among other types, include sphingolipids (essential components of the myelin sheath that enhances nerve transmission), phospholipids (important structural components of cell membranes), and fatty acids. Fatty acid synthase (FAS) is a multi-enzyme complex that catalyzes the synthesis of fatty acids. Within the FAS complex, the acyl-carrier protein (ACP) requires pantothenic acid in the form of 4'-phosphopantetheine for its activity as a carrier protein (3). A group, such as the 4’-phosphopantetheinyl moiety for ACP, is called a prosthetic group; the prosthetic group is not composed of amino acids and is a tightly bound cofactor required for the biological activity of some proteins (Figure 2). Acetyl-CoA, malonyl-CoA, and ACP are all required for the synthesis of fatty acids in the cytosol. During fatty acid synthesis, the acyl groups of acetyl-CoA and malonyl-CoA are transferred to the sulfhydryl group (-SH) of the 4’-phosphopantetheinyl moiety of ACP. The prosthetic group is used as a flexible arm to transfer the growing fatty acid chain to each of the enzymatic centers of the type I FAS complex. In the mitochondria, 4'-phosphopantetheine also serves as a prosthetic group for an ACP homolog present in mitochondrial type II FAS complex (8). 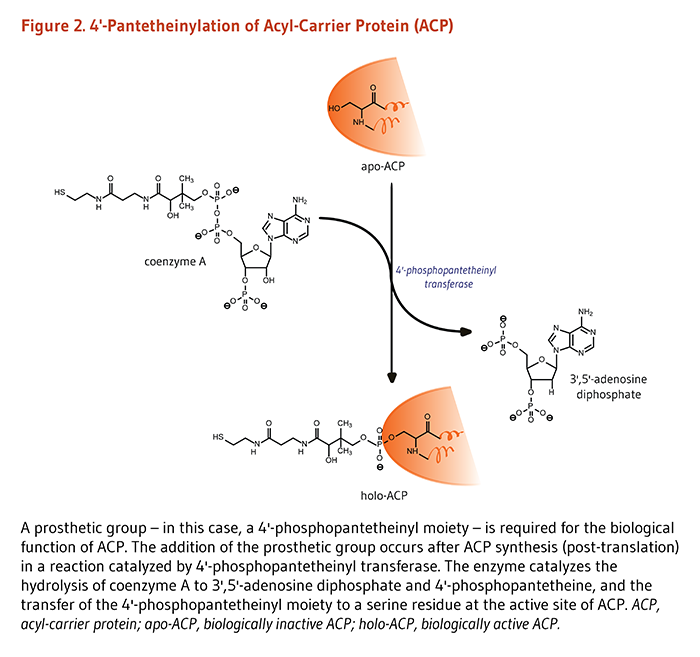 The enzyme 10-formyltetrahydrofolate dehydrogenase (FDH) catalyzes the conversion of 10-formyltetrahydrofolate to tetrahydrofolate, an essential cofactor in the metabolism of nucleic acids and amino acids (Figure 3). Similar to ACP, FDH requires a 4’-phosphopantetheine prosthetic group for its biological activity. The prosthetic group acts as a swinging arm to couple the activities of the two catalytic domains of FDH (9, 10). A homolog of FDH in mitochondria also requires 4’-phosphopantetheinylation to be biologically active (11). 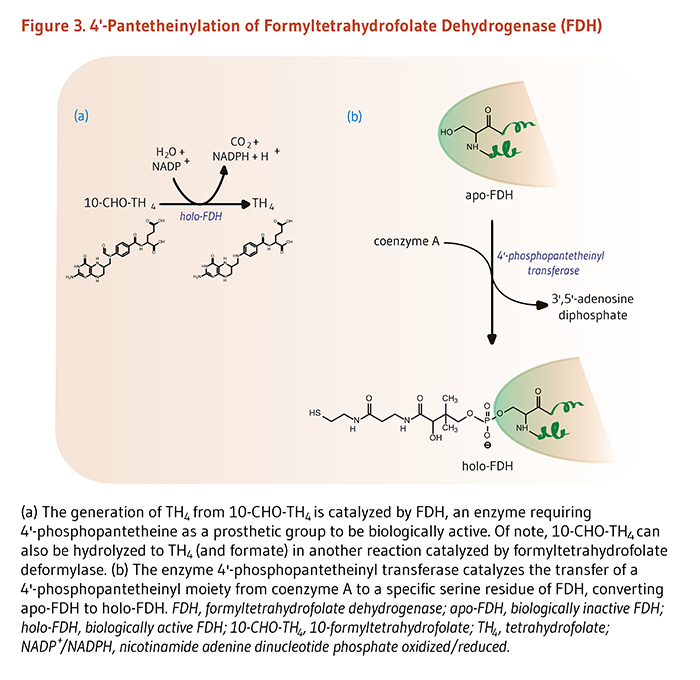 4’-phosphopantetheinylation is required for the biological activity of the apo-enzyme α-aminoadipate semialdehyde synthase (AASS). AASS catalyzes the initial reactions in the mitochondrial pathway for the degradation of lysine — an essential amino acid for humans. AASS is made of two catalytic domains. The lysine-ketoglutarate reductase domain first catalyzes the conversion of lysine to saccharopine. Saccharopine is further converted to α-aminoadipate semialdehyde in a reaction catalyzed by the saccharopine dehydrogenase domain (Figure 4). 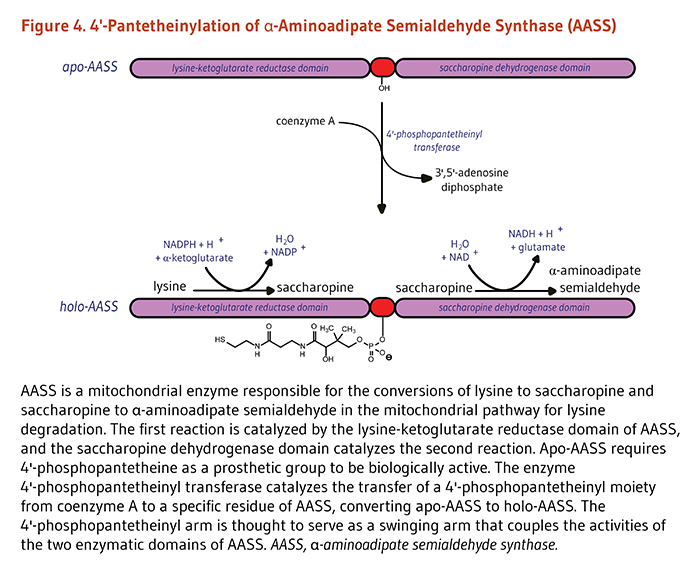 Calcium homopantothenate (or hopantenate) is a pantothenic acid antagonist with cholinergic effects (i.e., similar to those of the neurotransmitter, acetylcholine). This compound is used in Japan to enhance mental function, especially in Alzheimer’s disease. A rare side effect was the development of hepatic encephalopathy, a condition of abnormal brain function resulting from the failure of the liver to eliminate toxins. The encephalopathy was reversed by pantothenic acid supplementation, suggesting that it was due to homopantothenate-induced pantothenic acid deficiency (14). Of note, genetic mutations in the human gene PANKII, which codes for pantothenic acid kinase II (see Figure 1 above), result in impaired synthesis of 4'-phosphopantetheine and coenzyme A (see Function). The disorder, called pantothenate kinase-associated neurodegeneration, is characterized by visual and intellectual impairments, dystonia, speech abnormalities, behavioral difficulties, and personality disorders (15).

Yet, because pantothenic acid is widely distributed in nature and deficiency is extremely rare in humans, most information regarding the consequences of deficiency has been gathered from experimental research in animals (reviewed in 3). Pantothenic acid-deficient rats developed damage to the adrenal glands, while monkeys developed anemia due to decreased synthesis of heme, a component of hemoglobin. Dogs with pantothenic acid deficiency developed low blood glucose, rapid breathing and heart rates, and convulsions. Chickens developed skin irritation, feather abnormalities, and spinal nerve damage associated with the degeneration of the myelin sheath. Pantothenic acid-deficient mice showed decreased exercise tolerance and diminished storage of glucose (in the form of glycogen) in muscle and liver. Mice also developed skin irritation and graying of the fur, which is reversed by pantothenic acid administration.

The diversity of symptoms emphasizes the numerous functions of pantothenic acid in its coenzyme forms.

Because there was little information on the requirements of pantothenic acid in humans, the Food and Nutrition Board of the Institute of Medicine set an adequate intake (AI) based on observed dietary intakes in healthy population groups (Table 1) (16).

The addition of calcium D-pantothenate and/or pantothenol (Figure 5) to the medium of cultured skin fibroblasts given an artificial wound was found to increase cell proliferation and migration, thus accelerating wound healing in vitro (17, 18). Likewise, in vitro deficiency in pantothenic acid induced the expression of differentiation markers in proliferating skin fibroblasts and inhibited proliferation in human keratinocytes (19). The application of ointments containing either calcium D-pantothenate or pantothenol — also known as D-panthenol or dexpanthenol — to the skin has been shown to accelerate the closure of skin wounds and increase the strength of scar tissue in animals (3).

The effects of dexpanthenol on wound healing are unclear. In a placebo-controlled study that included 12 healthy volunteers, the application of dexpanthenol-containing ointment (every 12 hours for 1 to 6 days) in a model of skin wound healing was associated with an enhanced expression of markers of proliferation, inflammation, and tissue repair (20). However, the study failed to report whether these changes in response to topical dexpanthenol improved the wound-repair process compared to placebo (20). Some studies have shown no effects. Early randomized controlled trials in patients undergoing surgery for tattoo removal found that daily co-supplementation with 1 gram or 3 grams of vitamin C and 200 mg or 900 mg of pantothenic acid for 21 days did not significantly improve the wound-healing process (21, 22). Yet, in a recent randomized, double-blind, placebo-controlled study, the use of dexpanthenol pastilles (300 mg/day for up to 14 days post surgery) was found to accelerate mucosal healing after tonsillectomy in children (23).

Early studies suggested that pharmacologic doses of pantethine, a pantothenic acid derivative, might have a cholesterol-lowering effect (24, 25). Pantethine is made of two molecules of pantetheine joined by a disulfide bond (chemical bond between two molecules of sulfur) (Figure 5). Pantethine is structurally related to coenzyme A and is found in the prosthetic group that is required for the biological function of acyl-carrier protein, formyltetrahydrofolate dehydrogenase, and α-aminoadipate semialdehyde synthase (see Function). In a 16-week, randomized, double-blind, placebo-controlled study, daily pantethine supplementation (600 mg/day for 8 weeks, followed by 900 mg/day for another 8 weeks) significantly improved the profile of lipid parameters in 120 individuals at low-to-moderate risk of cardiovascular disease (CVD). After adjusting to baseline, pantethine was found to be significantly more effective than placebo in lowering the concentrations of low-density lipoprotein-cholesterol (LDL-C) and apolipoprotein B (apoB), as well as reducing the ratio of triglycerides to high-density lipoprotein-cholesterol (TG:HDL-C) (26). Although it appears to be well tolerated and potentially beneficial in improving cholesterol metabolism, pantethine is not a vitamin, and the decision to use pharmacologic doses of pantethine to treat elevated blood cholesterol or triglycerides should only be made in collaboration with a qualified health care provider who provides appropriate follow up. 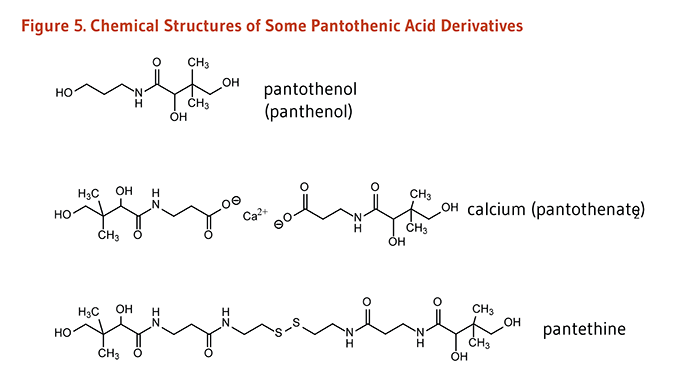 The bacteria that normally colonize the colon (large intestine) are capable of synthesizing pantothenic acid. A specialized transporter for the uptake of biotin and pantothenic acid was identified in cultured cells derived from the lining of the colon, suggesting that humans may be able to absorb pantothenic acid and biotin produced by intestinal bacteria (27). However, the extent to which bacterial synthesis contributes to pantothenic acid intake in humans is not known (28).

Pantethine is used as a cholesterol-lowering agent in Japan and is available in the US as a dietary supplement (29).

Pantothenic acid is not known to be toxic in humans. The only adverse effect noted was diarrhea resulting from very high intakes of 10 to 20 g/day of calcium D-pantothenate (30). However, there is one case report of life-threatening eosinophilic pleuropericardial effusion in an elderly woman who took a combination of 10 mg/day of biotin and 300 mg/day of pantothenic acid for two months (31). Due to the lack of reports of adverse effects when the Dietary Reference Intakes (DRI) for pantothenic acid were established in 1998, the Food and Nutrition Board of the Institute of Medicine did not establish a tolerable upper intake level (UL) for pantothenic acid (16). Pantethine is generally well tolerated in doses up to 1,200 mg/day. However, gastrointestinal side effects, such as nausea and heartburn, have been reported (29). Also, topical formulations containing up to 5% of dexpanthenol (D-panthenol) have been safely used for up to one month. Yet, a few cases of skin irritation, contact dermatitis, and eczema have been reported with the use of dexpanthenol-containing ointments (32, 33).

Large doses of pantothenic acid have the potential to compete with biotin for intestinal and cellular uptake by the human sodium-dependent multivitamin transporter (hSMVT) (27, 34).

Oral contraceptives (birth control pills) containing estrogen and progestin may increase the requirement for pantothenic acid (30). Use of pantethine in combination with cholesterol-lowering drugs called statins (HMG-CoA reductase inhibitors) or with nicotinic acid (see the article on Niacin) may produce additive effects on blood lipids (29).

There is currently little evidence that older adults differ in their intake of or their requirement for pantothenic acid. Most multivitamin/mineral supplements provide at least 5 mg/day of pantothenic acid.

Reviewed in July 2015 by:
Robert B. Rucker, Ph.D.
Distinguished Professor Emeritus
Department of Nutrition and School of Medicine
University of California, Davis 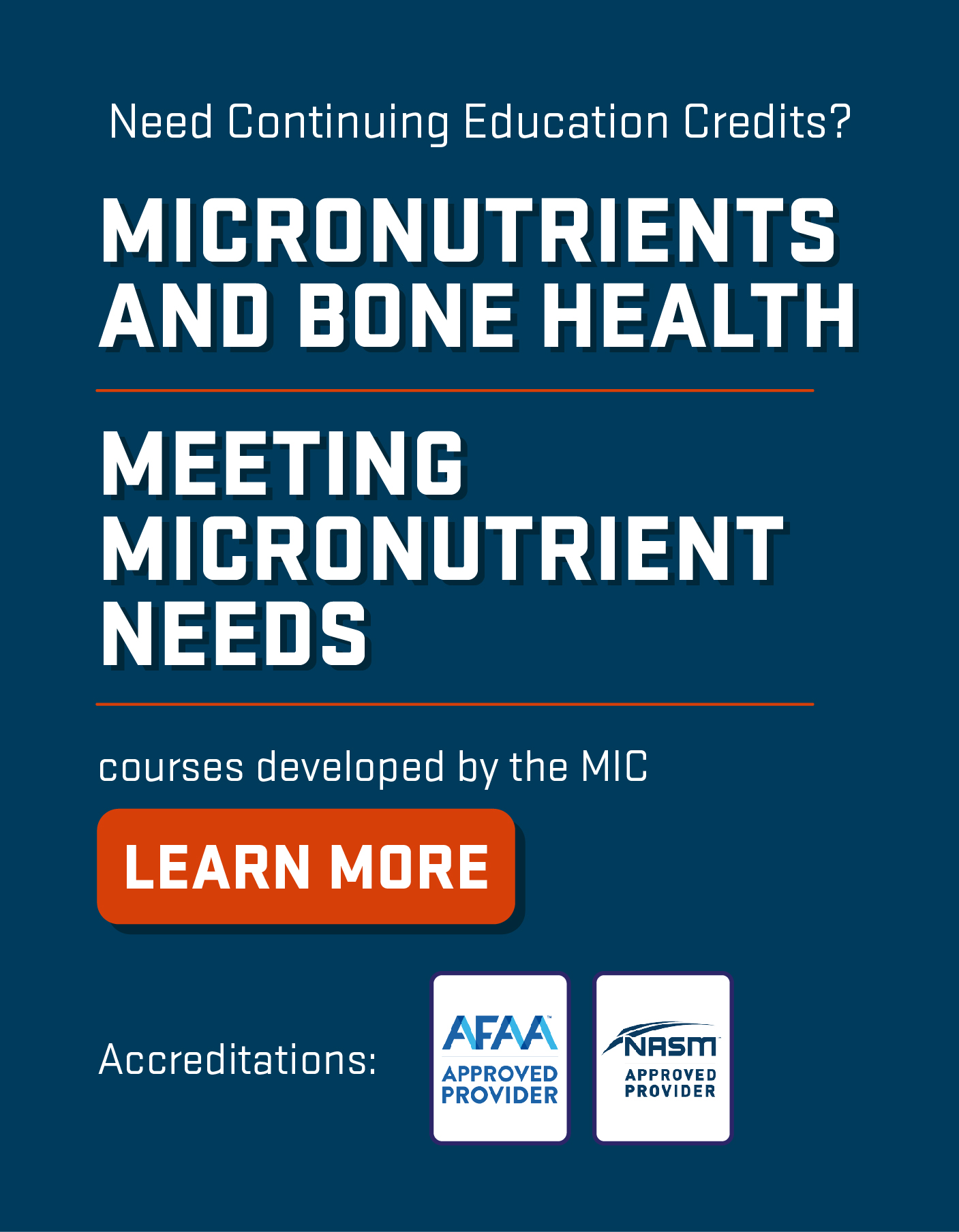 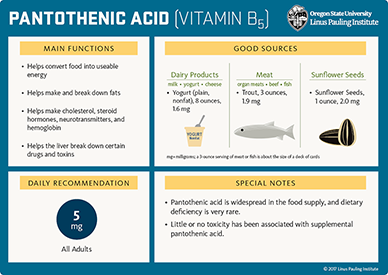